November 05, 2008
As you will probably know, the 'static' keyword in Java is used to denote fields, methods, and inner classes that do not belong to any instance of a class. They belong to the class itself and can be accessed when the class is loaded. In this post we will focus on static fields and very briefly discuss pitfalls of their usage.

Static fields are used for a variety of reasons:
A few days back I was reviewing some code, and I realized that mutable static fields were being used in way too many places. This can make the code very brittle.

When an object has a mutable static field, for all practical purposes this becomes a global variable, and thus has all the pitfalls of global variables. Some object might change the value, and another object that was depending on the old value will behave inconsistently. 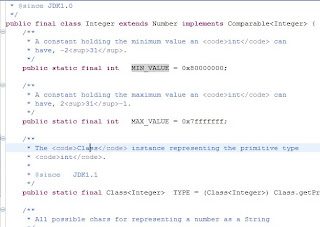 However, there are several uses of static fields that border on making your code unstable. In future posts I will discuss various ways in which static fields are used. I will also discuss potential pitfalls of the usage and how to avoid such situations.

Popular posts from this blog

Running your own one person company

June 06, 2011
Recently there was a post on PuneTech on mom's re-entering the IT work force after a break. Two of the biggest concerns mentioned were : Coping with vast advances (changes) in the IT landscape Balancing work and family responsibilities Since I have been running a one person company for a good amount of time, I suggested that as an option. In this post I will discuss various aspects of running a one person company. Advantages: You have full control of your time. You can choose to spend as much or as little time as you would like. There is also a good chance that you will be able to decide when you want to spend that time. You get to work on something that you enjoy doing. Tremendous work satisfaction. You have the option of working from home. Disadvantages: It can take a little while for the work to get set, so you may not be able to see revenues for some time. It takes a huge amount of discipline to work without a boss, and without deadlines. You will not get the benefits (insuran
13 comments
Read more

May 30, 2009
If you are trying to test Grails domain class constraints by putting your unit test cases in the 'test/unit' directory, then your tests will fail because the domain objects will not have the 'valdate' method. This can be resolved in two ways: Place the test cases inside test/integration (which will slow things down) Use the method 'mockForConstraintsTests(Trail)' to create mock method in your domain class and continue writing your test cases in 'test/unit' What follows is some example code around this finding. I am working on a Groovy on Grails project for a website to help programmers keep up and refresh their skills. I started with some domain classes and then moved on to write some unit tests. When we create a Grails project using grails create-app , it creates several directories, one of which is a directory called 'test' for holding unit tests. This directory contains two directories, 'unit', and 'integration' for uni
11 comments
Read more

Some thoughts on redesigning education

October 04, 2009
Some time back I read a blog post on redesigning education. It asked some very good questions. Stuff which I had been thinking of myself. I left my thoughts on the blog, but I would also like to start a conversation around these ideas with those who read this blog as well. I would like to know what other people think of the issue of redesigning (college) education. I have often thought about how college education can be improved. To answer this question, we first have to ask a very basic question. What is the purpose of education? To me, we need education for 3 things: To learn more about the world around us To lead positive constructive lives To earn a good living / fulfill our ambitions I think education has to a large extent evolved to fulfill #3 (with a bias towards earning a comfortable living). The semester system, along with multiple choice tests, and grading, has made our education system into an assembly line. Students are pushed into the assembly line, given classes, admini
7 comments
Read more